You thought I would stop at one article for a topic like this? I’m going to plough on! For this post, I wanted to explore the launch of one of the most iconic computing device in the last fifty years: the Macintosh. 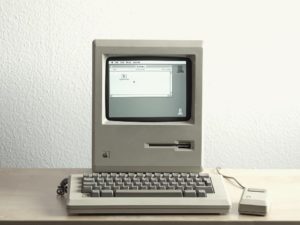 When Steven Paul Jobs announced the Macintosh to the world, it was considered to be not a breakthrough in computing per se. There were already computers built by the giant of that era, IBM. This was a breakthrough of emotion. For the first time, people could use computers without being completely flummoxed by them.

This was accomplished by Jobs after previous failures and the Macintosh team going through hell to meet Job’s idealistic targets in design and engineering. The previous model, the Apple Lisa, died a slow death as Jobs deliberately deviated resources away from it because he had been removed from the Lisa project and had wanted a faster, cheaper computer that was friendly and easy to use. In fact, it was the Lisa that first introduced the mass market GUI in a computer. The project and even the name wasn’t even his idea, it was Jef Raskin’s. But what Raskin had conceived, if he had stayed leader of the project, would most likely not have resulted in the metamorphosis the computer industry went through with the Macintosh.

So what was different about it? For those who were born well into the 80s and later (the “Millennials”), this photo looks like an ancient pile of e-waste. You’d be surprised to know that this is how its main competitor, the IBM PC 5150, looked like: 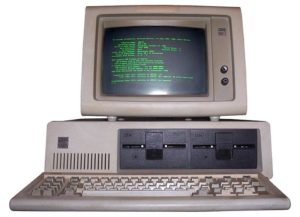 IBM machines, and for that matter, those of every other maker, were completely command line based and weren’t designed with aesthetics in mind, not ones that mattered to the customer anyway. Jobs wanted to change this, and for that, he went to the extent of imagining the screen of the Macintosh as a face and positioned the floppy drive (ancient squarish disk that stored data, for those who don’t know) such that it looked like a one-sided smile. Yes, go back up and look at it.

Jobs was so insistent upon the Macintosh setting a new precedent in the new GUI-enabled computing world he had envisioned, he even refused to add a numeric keypad! Yep, no numeric keypad. He did later agree to it but ended up not adding any arrow keys and function keys. The former, he felt, would encourage users to use the new mouse system of pointing and clicking, while the latter would force developers to design new functions for a new system. Imagine, launching a product with that audacity against the likes of then behemoths like IBM.

Another major change was that the Macintosh had very low storage. With only one drive in which to run the file system, applications and data, users had to connect external drives. It wasn’t that it did not have memory, it’s bitmapped user interface was so computationally intensive at the time, it kept running out of memory and storage! There was no internal fan to relieve the heat because Jobs did not like the whirring sound they made. After component failures due to overheating, they retrofitted a third party fan into the case. But all these aspects, which seem trivial and simplistic now, were huge product decisions in the 80s when computing was like rocket science. Every move Jobs made brought computers closer to what they are now.

Steve Jobs changed several industries and reinvented many products but if we were to look at his first revolution, it would be the Apple Macintosh that evolved into today’s MacBook Pro.