The 1980s was when computing really took off. Sure, ‘mobile’ phones were the size of house bricks and ‘laptops’ were better placed on a table than your lap, but computing and technology were at least attempting to go mobile. Faxes were the way to go, although by the end of the 80s, what became the internet was in its infancy. 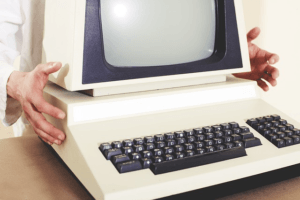 Image by andreas160578 from Pixabay

But apart from the electronic music of the era, most people will remember the 80s for the advent of home computing. At one end of the Spectrum (sorry) was Sir Clive Sinclair’s rubber-keyed bit of genius kit, released in 1982. The ZX Spectrum introduced many teens to gaming, with iconic games such as Manic Miner and Jet Set Willy. The Commodore PET was already illuminating offices with a strange green glow, and at the other end of the gaming rainbow, early Ataris (the Atari 400 and Atari 800) were available for those who could afford them.

But none of these iconic names invented the laptop, or portable computer. That honor went to Osborne. In 1981, a former journalist called Adam Osborne debuted the world’s first portable computer, the Osborne 1. It had a 5 inch CRT monitor and a load of bundled software. Despite this innovation his company, Osborne Computer, collapsed within three years. The machine was about the size of a sewing machine. It also weighed over 24lb, or almost 11kg, so a gym subscription might have been an idea for anyone owning one, as lugging it around would have been tiring, to say the least. It didn’t even have a battery, but it fitted in a case and could (just about) be carried.

Not to be left behind, Commodore released the luggable version of their incredibly popular Commodore 64, the first full-color portable machine. It was ‘only’ 9kg in weight, despite all the full color tech. 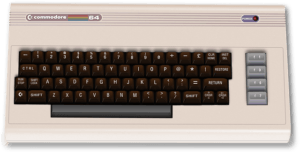 Image by ralfsfotoseite from Pixabay

Ah yes, Commodore. The C64 was another one of the iconic 80s retro computing machines. To this day the rivalry between those who prefer Atari’s ST range and those who are die-hard Commodore C64 or Amiga fans is keenly felt. There are many clubs, societies and museums dedicated to the 80s gaming boom, when teenagers coded games to cassette tape in their bedrooms, copied the tapes and sold them illicitly to their friends. Magazines with page after page of code allowed keen players to transcribe games to their own machines, while instead of wanting to be train drivers or pilots, young boys dreamed of joining a big gaming studio and being paid to spend their days coding.

By the mid-80s, true laptops were on the rise and big names of the time such as Kaypro, Toshiba and IBM were quick to jump on the bandwagon. The Kaypro 2000, Toshiba T-series and the IBM PC Convertible were all introduced in the mid 80s. Machines had acquired a clamshell design, thanks to Grid Compass, and battery power after the efforts of the Kookaburra’s designers. They were also becoming lighter, with some of the more advanced models weighing under 5kg. 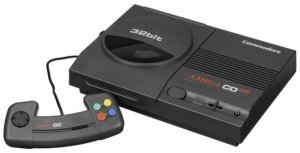 Image by You’re welcome! Thanks for your votes and comments! 🙂 from Pixabay

As the 80s progressed, so did the technology. By the end of the 80s, portable computers, still ‘luggable’ rather than truly portable, were being regularly released. The US Air Force was behind the development of the SupersPort series from ZDS or Zenith Data Systems in 1987, while Hewlett-Packard, Cambridge and Compaq produced ‘laptops’. The Cambridge Z88 was only about the size of a sheet of A4 paper, and is often considered the first personal digital assistant or PDA.

The last major release before the Age of Apple vs Windows was the NEC Ultralite, which was similar to today’s notebook computers. It had a 2MB RAM drive which meant it was smaller and lighter than ever before.

For many though, the Sinclair ZX Spectrum, or ‘Speccy’, was the first computer they ever owned, and life was never the same again. In the UK, without the likes of the Spectrum for games and the BBC Micro for words, many people would never have discovered their inner geek. Businesses started to have computers for their staff, and by the early 90s, huge (and noisy) dot matrix printers printing onto green and white striped computer paper were widely seen. Unlike the gaming machines, which used tapes, and the BBC Micro, which used rigid 3 1/2 inch diskettes to save data, these enormous machines had equally large 8 inch or 5 1/4 inch floppy disks for their memory.

Image by WikimediaImages from Pixabay

At around the same time, Atari released a slew of machines in the US. The portable (although heavy at almost 7kg) Atari STacy from 1989 was essentially a portable version of the Atari ST with a screen attached. It was originally designed to run on flashlight batteries, but this proved a very expensive option and later models had the battery case glued shut, forcing owners to use mains power only. For those using it for music-sequencer work, this was not a problem. It may have looked like a chunky laptop, but it didn’t need to behave like one.

Another Atari model from 1989 was the Atari Portfolio. An early version of what is now called a palmtop, this machine was a licenced version of the DIP Pocket PC. It was essentially an electronic filofax, containing a text editor, spreadsheet, phone book and time manager.

Looking at these early laptops, palmtops, tablets and netbooks, it is not difficult to trace a direct path to the smartphones of the 21st century. The wish to cram more ability into less space has always been the driving factor, and as weights and sizes have dropped, computing capacity has risen. But without those early bedroom coders, many of today’s gadgets may never have been developed.

Is your laptop broken or too old and not keeping up with new software demands? You can sell used laptop to SellBroke for cash and upgrade to a newer one.