Huawei has been making smartphones for a while now, but they are a fairly new competitor in the whole laptop space. In the area of ultraportables and larger beefier workhorses, it’s hard to stand out from those that have been doing this for so long. But, maybe the newcomer can bring some real innovation and inspire a little more competition in this very stale market. However, this can’t be done without taking some cues from some of the best in the game. So, the question is: Is the Huawei Matebook Pro an incredibly compelling laptop that’s worth your attention, or just another Apple MacBook Pro ripoff? 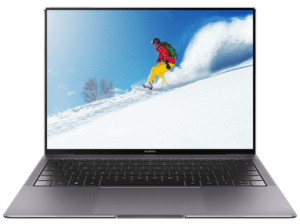 Copy of a MacBook Pro?

On paper, this is a no compromise machine. It’s bringing the features and specs to the device that is future-proof but also hangs on to a little bit of the past for convenience sake. The Matebook X Pro comes in at just under 3-pounds and it’s made out of an aluminum material that feels very premium. It’s built extremely well, though there’s no getting around the fact that this laptop looks almost like a carbon copy of a MacBook Pro. However, what Apple’s high-end laptop is missing in some areas, the matebook Pro has; specifically when it comes to ports.

There are two USB-C ports on this machine with one of them being Thunderbolt 3 compatible and on the other side, there is a full-size USB-A port. You may not use the USB-A port very often, but just having it should give you some real peace of mind in the event you ever need one. Alos, you won’t have to search high and low for a USB-C to A dongle should you need it. Despite what some manufacturers may say, I don’t think it took away from the design or added and unnecessary thickness. 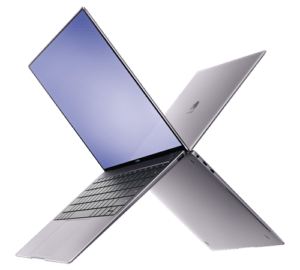 Another thing I really appreciate about the Matebook X Pro is that it’s almost a bezel-less 14″ display. This computer has a 91% screen to body ratio. That gives you a lot of real estate to navigate around and to take advantage of all of that screen resolution.

The display is not a 4k display. It comes in just under with a resolution of 3000 x 2000, so it’s more like 3k. However, that being said, it gets very bright, it’s got excellent color reproduction and it also has a touchscreen which is super nice and convenient for the times when you need it. Movies, games. web browsing, everything looks really good on this display, though you may notice that one thing is missing, and that’s the webcam. 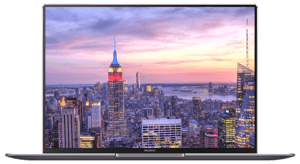 Huawei did something special with the camera placement on the notebook X Pro. Instead of putting it under the screen or doing a notch design up at the top, the webcam lives in a dedicated key on the keyboard. Simply press down on that key and the camera pops up and it’s ready to use.

It’s definitely something I’ve never seen before and it’s nice for those conscious of their design, and especially in this day in age, their privacy. It is worth noting though, that the angle isn’t good, in fact, it basically sucks and there’s no way to adjust it. It lives in a mechanical switch you that leaves you either with open or closed, there’s no in between. Also, if you are going to use that webcam you are going to have to be sitting a considerable distance away from the laptop to be in decent view of the 1MP camera. 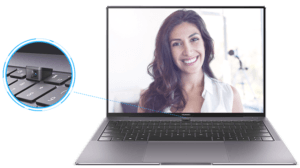 OK, so I’m not a huge fan of the placement of the webcam no matter how much I dig the concept, but the rest of the keyboard is actually fantastic. The hey are a chiclet style and very comfortable to type on and it reminds me of the old-style MacBook Pro style keyboard, which is a very good thing. There’s a good amount of key travel and the entire keyboard just feels very spacious. It’s also spill-proof. There’s also a Windows Hello fingerprint reader built right into the power button right above the keyboard. This standard feature gives you a secure way to lock and unlock your machine.

The same story also goes for the trackpad below. It’s very spacious, and it’s really smooth for navigating around the OS. It’s got multi-touch support and it also significantly bigger than what you see on other laptops of this size. After using it for a while I really came to appreciate that extra trackpad space. 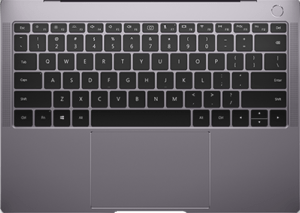 For a laptop that was such a strong performer overall, I have to say that I was pretty disappointed by the built-in speakers, especially after how much Huawei has been hyping them up. To the company’s credit, they are technically Dolby Atmos certified and they do get very loud. Unfortunately, after listening to them for quite a while they are comparable to every other pair of laptop speakers that you’ve probably heard. They’re good enough to sit down and listen to music or YouTube videos, but if you’re going to really want to enjoy a listening experience, do yourself a favor and get yourself a pair of good headphones or a Bluetooth speaker. It’ll be much better than the built-ins. 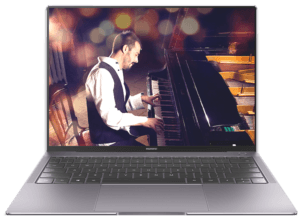 When it comes to performance, the Matebook X Pro can definitely hold its own against other in this class. It has Intel’s 8th generation processor inside and out testing unit specifically was packed with an i7-8750U with 16GB of RAM and a 512GB NVME SSD.

You’re getting an i7, though it is worth noting that it’s running at a slower clock speed of only 1.8GHz. Honestly, for a thin and lightweight laptop, you’re not going to get desktop power. If you keep your expectation levels realistic, you’ll be really happy with the performance you are able to get out of it, and it’s an i7 so it can handle multitasking.

Day-to-day usage of the standard stuff: email, web browsing, watching videos are going to run on this machine without any issues. It can also handle 4k video editing in Premier at full quality playback without dropping frames, so that’s nice and it can even do a little gaming… at least, a little bit.

Our review unit had a dedicated GPU built in. It’s an NVIDIA MX 150 and it does not come close to delivering the power of a desktop GPU. But having 2GB of dedicated video RAM built into this laptop is really nice. Don’t expect any miracles here, but turn down your settings to medium or low (depending on the game) and you can actually get games running at a very playable framerate. 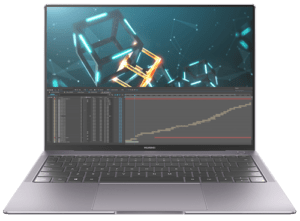 I know many people are curious about the battery life on the Matebook X Pro. And I’ll tell you it comes right in at the middle of the pack, so that’s acceptable. I ended up with a very respectable 7-8 hours of battery life on average during my testing. There’s no real need to stress about being around an outlet for a day or so. You’ll be able to get through an average day of work or school just fine, as long as you aren’t doing anything really super CPU intensive.

As a complete package, the Matebook X Pro is giving you a lot to consider. You’ll need to get over the fact that it looks like a MacBook Pro because it totally does. But once you do you can enjoy a beautifully designed and a really well-made machine. It’s a very compelling package, but there’s a catch. Pricing and availability are a little bit up in the air right now. Huawei says this machine is coming to the US, but we don’t know when. We also don’t know what the exact pricing will be when it does get here. In Europe right now it’s priced at about $1,800 USD. This is not an insignificant amount of money, and you’re getting a laptop that definitely has some shortcomings. However, as the second attempt from a newcomer in the space, I’d say give it some serious thought and consideration. 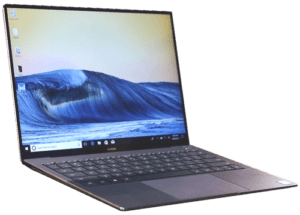