When it comes to buying laptop parts it’s a different story now compared to 10 years ago. Internet growth sped up rapidly emanating the urge of online presence in every aspect of our lives, including shopping. I don’t really know how people bought computer parts before. Those times are gone and we don’t have to worry about it. Buying specifically laptop parts is easy if done right. Most parts have part number and if they match you’re looking at the right piece, even if you buy from China. Chinese sellers challenge American ones taking advantage of cheap shipping from their country and cheap labor. By lowering their prices they easily lure American buyers into doing business with them. 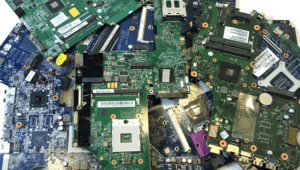 Unfortunately they can disappoint on many levels.

Lower price means low quality service. The shipping is slow and customer service is very unresponsive. Knowing exactly what you need is a big plus, and you should be able to purchase the right part effortlessly. Shipping also can be upgraded to DHL that’s amazingly fast from China to the US, but it’s pricey.

Let’s think for a minute about where those parts are coming from.

Do you know about the salmon caught on American coast, and then shipped to China for processing, and then brought back to America for consumption. Well this isn’t as bad. Chinese businesses very actively seek and purchase broken computer parts like motherboards, ship them to their country, repair them and sell them back in the States as new. 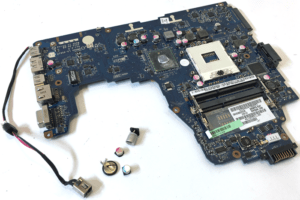 Seriously lots of people here think they are buying new parts from China vs used ones from domestic sellers. The used good parts were tested and work great vs the broken ones that went to Asia for second life chance. Those “like new” parts from China on eBay are very low quality. Most repairs are temporary and don’t last longer than warranty period, only of course if they work initially. And I don’t mean plastic pieces of a laptop’s case. I mean circuit boards that are resoldered and reheated to bring back their functionalities. 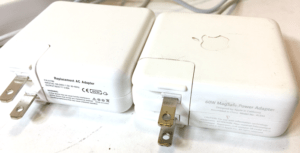 Buying this stuff from China is often a waste of you time, and sometimes money too.

Yes, you can return such defective equipment painlessly through platforms like eBay and Amazon. But no one will give you the time back when you were waiting and then taking your laptop apart and putting it back together, just to uncover some defect that was impossible to detect before installation.

The ease of setting up an online store from anywhere in the world doesn’t mean that all sellers are equal. In some countries it’s normal to open new business under a new name to escape bad reputation if things go wrong. That way you can’t track their performance like BBB does for us here, and it’s hard to weed out those practicing unfair game. 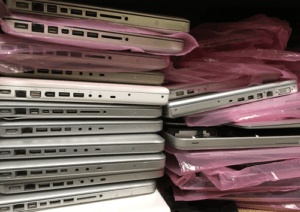 Another way of sourcing laptop parts in China can be clearly called a dumpster diving.

That means that all the products that didn’t pass quality control, and were disposed of, were later illegally recovered and offered for sale as new and original around the globe.

Those products were in fact new. But they were not intended for sale. They hurt big brand business on many levels. They are not only stealing profits, but even worse disappointing customers with bad quality unexpected with names like Apple or Samsung. I’ve seen hundreds or more of new complete displays for MacBooks and other such components looking very good at first glance. But later they turned out to be all defective after further inspection or even after installation.

Those people completely don’t care about your experience. They think that the slightly lower price will justify bad quality. And from the buyer’s perspective it’s easy to fall for that because they advertise as brand new. 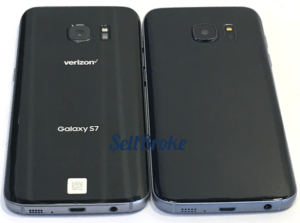 Another issue with products imported from China is their legality.

Did you hear stories about Apple’s factories running night shifts, but not on Apple’s watch. It seems cruel, producing items to steal from Apple and other brands, to later compete on the same market with the company that lawfully owns all the product. Apple and others hired law firms to chase down and stop the problem. 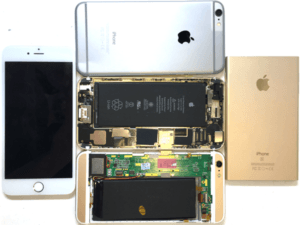 Lastly the parts are counterfeit and much worse quality.

And this also goes for complete electronic devices. Generic items and knockoffs can be widely purchased through Chinese giant platform, Alibaba. You can buy an iPhone 7 for $50 or Galaxy S7 for less. It’s not going to be a real iPhone. It may look just like the original especially in the pictures in online listings.

Don’t buy computer parts from China just because they are a little bit cheaper. Quality has its price. Think about installing a computer part just to discover that it’s faulty. Waste of time and money. Additionally if you are a seller yourself and want to sell fake Chinese products on domestic market, think twice. Sooner or later you will get in trouble. Apple and others have put in place mechanisms that prevent selling fake or otherwise illegal products that essentially harm their reputation and business in general. Those companies are ready to sue and will get you banned from selling on eBay or Amazon. 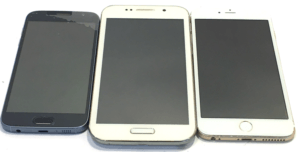 Buy laptop parts from well established and respected places like gotlaptopparts.com and others that enjoy and maintain great online presence and respect. People like that take pride in their work and take care of their customers on all levels, assuring quality of the parts and service. Ebay’s feedback and online reviews will undoubtedly point you in the right direction.