After talking about best selling used laptops earlier this week now it's time to talk about some of the best selling tablets. 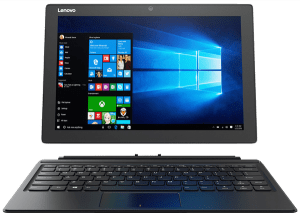 Let’s take a look at some of the specs and features. The Miix has a 12.2” display with a resolution of 1920 x 1200, which means the aspect ratio is 16:10. It’s a new 2-in-1 tablet that comes with a Wacom stylus that allows you to draw directly on the screen. The performance is good with the stylus and it does not demonstrate any lag time in producing what you’re doing. With the buttons on the pen itself you can adjust the pressure sensitivity easily. There doesn't seem to be much parallax error, but the diagonal lines can look a bit wavy at times. But this can be averted by zooming in.

Its size and design is basically the same as the Surface Pro 4 which is the basic benchmark design for this class of tablet. It is a bit heavier and has a rounded backside when set flat it wobbles just a bit. 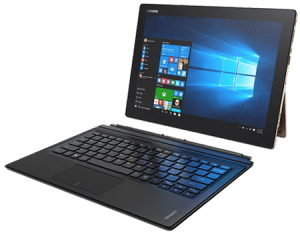 The keyboard pad offers very minimal flex considering it’s so thin. The size of it is obviously fairly small but the layout and the key travel and feedback really offers a great typing experience on such a small board. Lenovo really used their collective heads in designing the keyboard.

The display is an ADP that offers no scaling issues. The colors are sharp and the quality can be seen in the no light-bleed effects when viewing a completely black screen. You can turn off all of the internal drive enhancements and the colors still pop and are vivid even in their natural settings. 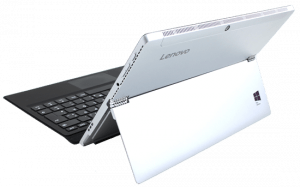 If you’re looking for a great sound machine, you will have to look elsewhere. These speakers are really tinny and at max volume they aren’t even as loud as some phones.

Performance is pretty good. The read and write speeds are 1,489 MB/s and 319 MB/s respectively. The SSD has super fast read speeds for sure. At times when you detach the keyboard it jams up a bit. There will probably be a fix for that in due time. The performance of the i5 is definitely enough power for this device, maybe even an i3 would be suffice, but the i5 for sure covers all the bases. During normal use the Lenovo runs about 35-40º celsius and the fan kicks in very aggressively. The noise it produces can be annoying, but you’ll get used to it. 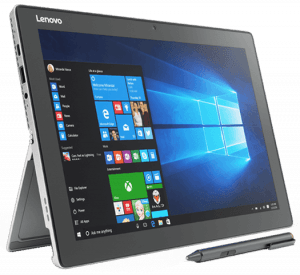 Battery life was hanging around 5 hours with 40-50% screen brightness. That’s pretty decent given the management it handles. It also comes with a very compact battery pack to recharge with. It is still not as good as Apple's iPad.

Is your tablet outdated or broken? Sell your broken tablet to Sell Broke and buy the new Lenovo Miix.