At some point in our modern American lives it seems to happens to all of us. You took it upon yourself and signed a two-year contract for a new iPhone with you local huge mobile phone service carrier. Your iPhone has not completed your contract time and it’s on the fritz. It’s acting up and you’re afraid it’s going to take a dive before the end of the contract sees the light of day. Whether it’s a failing touchscreen or the camera function seems to be breaking down, you have an easy answer at your fingertips. So don't stress it. You can now easily sell your broken iPhone online. 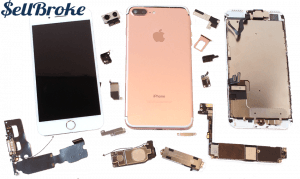 iPhones have been proven to have a higher failure rate than the ordinary consumer may not have known. In the Q2 reporting time of 2016 a study on today’s iPhones showed that the iPhone 6 failed 29% of the time; iPhone 6S failed 23%; iPhone 6S Plus failed 14% and the 6S Plus and iPhone 5S failed 13% and 8% respectively. This gives the flagship Apple device an overall failure rate of 58%. Wait...what? 58% failure rate from Apple’s iPhone series? Yes, that’s correct. The iPhone’s failure rate jumped up 25 percentage points in just one Quarter!

Studies have found that the iPhone 6 series were crashing at a 50% rate. On both organic and third party apps. That’s a bit disconcerting especially if you’re a devout and loyal Apple product consumer. Here you should have the most up-to-date devise with all of the best technology. And it’s crashing upwards to 50% of the time? That’s just not all that awesome.

Another issue that has been arising a lot in the iPhone 6 and 6 Plus is the touchscreen. It tends to fail and displays a gray bar on the top of the screen. In the short term you can squeeze the device to fix it. That will reconnect the ic chip with the touchscreen. Basically what’s been found to happen is the underfill between the ic chip and the touchscreen has been removed by design.

Over time and normal wear and tear the connection between the ic chip and the touchscreen degrades and begins to separate and lose its sensitivity to touch. Generally speaking this isn’t a problem at first and can be remedied with a hard reset. However the the BGA joint over time and drops will fully severe and then you're stuck with an iphone paperweight…. Those are our favorite, right? Yeah, not so much. But here’s where you're in luck. 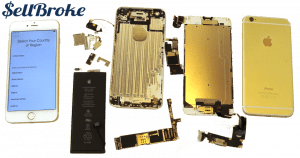 It only takes a few minutes to jump online and take a look at the selling iPhone market and how lucrative it is. But who has time, or the desire, to list it on a site and go through the countless questions that buyers have when they are gathering information about your selling item? You have to tell them that it’s deficient in some sort. And no one is going to jump through any hoops to buy a broken iPhone. This procedure can be both time consuming and frustrating.

So how are you going to sell your broken iPhone? Well, for me and my friends this is a no-brainer situation that has a super easy fix. Simply jump online and find a company such as www.SellBroke.com that buys back broken iPhones (and usually other electronic equipment as well). How does it get much easier than that? All you do is get your device information and find it on the long list of devices that they buy back, list its deficiencies and it’s physical condition, get a quote and get paid.

What’s that you say? Get paid after about 10 clicks of a mouse? The answer is YES. though this doesn’t fix the contract problem that you have with your provider. But it does free you of the issues of a broken iPhone. And gives you some spending money to put towards your new contract. Or as we prefer, buying a refurbished one on the secondhand market and not have to hassle with any binding contracts. 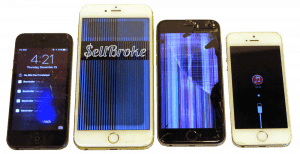 In conclusion we'll remind you to never stress over a breaking phone. It will happen sooner or later. You can sell defective iPhones to Sell Broke and buy a new one.