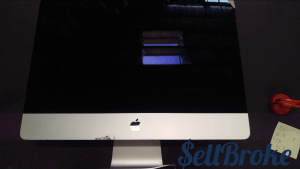 Boasting a beautiful 21-inch display and hardware that can handle any office or home computing needs, that works right out of the box, the Apple iMac is perfect for all of your home and/or office needs.

We know that this looks easy when shown as a step-by-step process, but trust us when we advise you, that this type of operation is not for beginners, and thus, we do not recommend that you attempt this on your own. There are simply just too many connectors, ports and components that are very easy to break or lose while attempting to remove these pieces. Just like in our previous Apple iMac disassembly tutorial we recommend that you have extensive experience disassembling electronics before attempting this, or you might end up with one expensive paperweight and no one wants that.

Attempt this at your own risk. The best idea could be to just sell your Apple computer back to us and let us handle the disassembly and you can just handle the cash we give you. 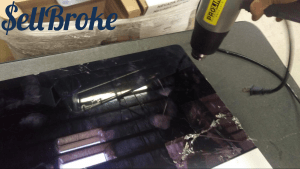 Our first step is to use a heatgun to heat one edge of the screen. I started at the top right, as the other top edge of mine was cracked. Don’t forget your suction cup for this part, or you risk injury to the glass. Take care to also not hurt yourself. 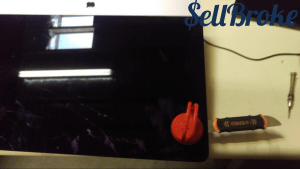 In the area you heated, place your suction cup and pull up gently, while wedging your plastic or metal opener inside to break the adhesive bond. When the glass is heavily cracked I put to use a metal tool since damaging the glass was a non-issue. Repeat this process around the top and sides of the screen. You do not need to break the adhesive on the bottom portion of the screen. Do not continue heating, once you have a pick wedged in the screen, this part was very easy. 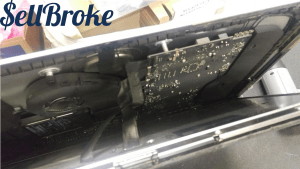 Now that you have separated the glass from the panel, be careful to not separate it too much. As noted earlier there are many cables connecting the screen to the motherboard. After you disconnect these you then can separate your panel from the frame and get to work. The top cable simply pulls out, directionally opposite from the motherboard, while the second cable has a lever that clamps it down. Flip it up, then the cable should slide out. 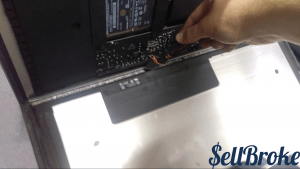 Don’t forget to slice the tiny film of adhesive. It’s small enough that you can just use your opener tool and the panel should come off easily. 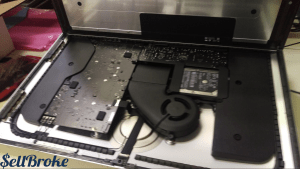 Now you have access to the motherboard and other components of the computer.

Remove all T10 Torx screws before attempting to remove any components. 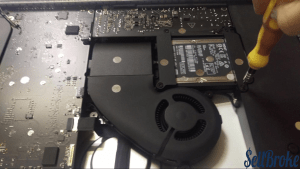 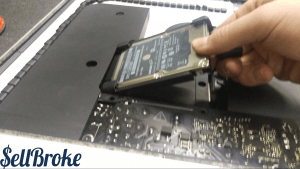 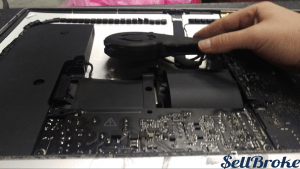 Now we move on to removing the fan. This is easily done, just make sure to disconnect it from the motherboard before doing lifting it up.

Move on to removing the motherboard and disconnect the speaker cables and cables for the webcam. Make sure the wifi card is disconnected from the antennas on the top of the board. 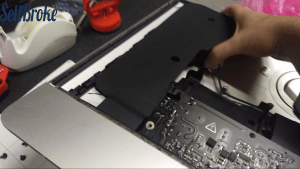 To remove the left speaker simply push it towards the top of the computer. Because it has a bit of adhesive stuck to it, it won’t necessarily come out easily. At this point you will need more space for removing the motherboard, and to gain access to it you must also remove the right speaker, taking the same care that you took to remove the first one. Don’t forget the adhesive will be holding it in place. Just gently tug on it and it should come free.< 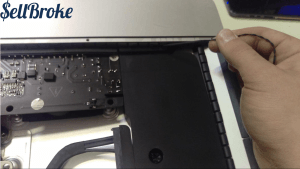 Before you remove the right speaker, make sure to remove the small cable snaking around the side to the bottom of the computer. It will break and ruin the power button if you do not remove it first. 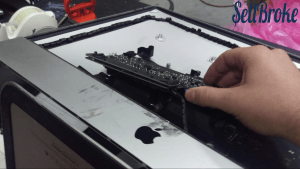 Be careful with this next part because it can get a bit complicated, but now that these have been disconnected you are ready to pull up on the power board, towards the top of the computer. The powerboard is attached to the computer frame and the motherboard, so don’t get too rough without, be careful and let it hang once you’ve removed it from underneath the frame. 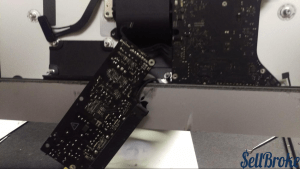 We will come back to it. 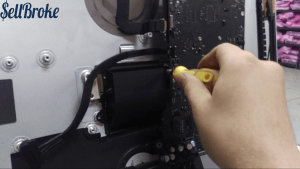 To disconnect the cable going to the power board pull up it away from the bottom of the computer, now you should have the motherboard free. 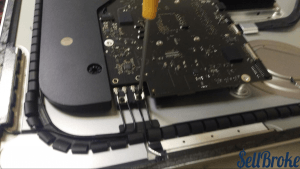 The wifi card has four T5 torx screws. It is then easily removed from the motherboard. Don’t forget to disconnect the antenna cables first! 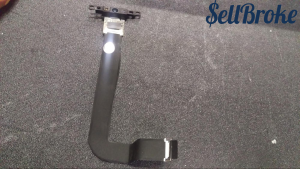 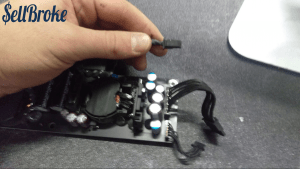 To remove the power board, press down on the connector as shown. It should come up easily. 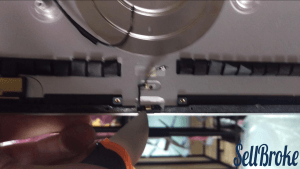 The microphone on the top of the frame should be removed with a heatgun and metal pry tool. This is an operation that should be done slowly and carefully.

Because the LCD panel is fused to the front glass, they cannot be separated.

Don't feel technically inclined enough to repair your iMac on your own? Better sell your computer before you do more damage to it.  We buy broken laptops, tablets and smartphones for cash. Submit your order on our website and you will receive a free shipping label instantly.