OK so yesterday we put our focus on the Sony Xperia Z5; today let us take a look at the upgraded version: the Sony Xperia Z5 Premium. In short it’s a very good looking phone, has a decent camera and a great fingerprint scanner. 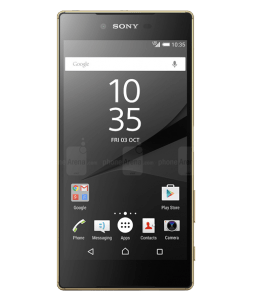 Sony is marketing the new Xperia Z5 Premium as the flagship device that is first to release the 4K display. For the most part the Z5 is pretty much the same as the previous Z5 Compact, and the regular Z5. The Compact has a 4.6-inch display, the Z5 has a 5.2-inch and then Premier rounds off the top with their largest 5.5-inch 4k display. Basically Soy is trying to cover a larger buyer’s demographic and capture more of the market. The nice thing about that is generally speaking the high-end devices almost always come with a larger display and not everyone wants a super-sized phone in their hands, and thus keeping the internal integrity of the three options the same, there really is something out there for everyone in within the Z-series phones and it all comes with little, to no sacrifice in performance. The only main difference in appearance with the Premium is they went back to the gloss rear cover and left the matte black with the smaller versions. Though many people prefer that look, if you’re a perfectionist then the constant fingerprints all over the phone may turn you off a bit.

The phone is all black and the only deviation from this is the chrome ring around the camera which has become one of SOny’s trademarks. The Z-series has relied on having a physical camera button, which seems to be very popular. But on the Premium model the volume rocker is also down low on the right-hand edge which can be accidentally depressed when holding the larger model in your hand when used as a phone. A little bit annoying, but certainly not a deal breaker. Many also say that the larger model is more comfortable to hold. 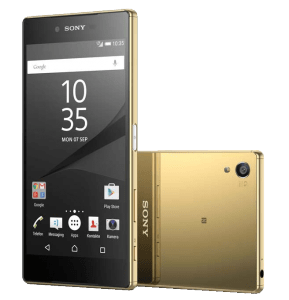 The cameras are great. They are both standard with a 23MP EXMOR RS sensor and 5MP shooters, which includes 4K video recording abilities on the rear facing camera. This brings us now to the first 4K display on this flagship smartphone device. Sony has always been a pioneer with their Ultra-HD displays, but it seems that a majority of the 4K display is more of a marketing gimmick than an actual useful attribute at this time-period of daily technology. Unless you have a 4K TV or computer monitor the only place that you’re going to be able to view true 4K is on the 5.5-inch’s display, and truthfully to the naked human eye it’s pretty much the same as the regular 1080p, not to mention that is consumes your battery strength exponentially faster. Also, you won’t be able to get any 4K material from Amazon, YouTube or Netflix so you’re limited on shooting our own. It does make up for it with its photo imaging. The 23MP cameras take pictures that seem to pop off the screen. They have more clarity, more zoom scope, more detail and color. But is that enough for you to toss out your other X-series for a better camera? I guess that’s up to you to decide after you sell your laptop or other devices and have that extra money to do so. 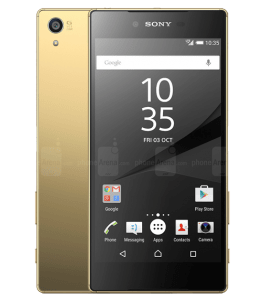 Eventually the world will become advanced and 4K will more than likely become more of an everyday feature and thus you’d be right on track with the natural progression. Inevitably in the future we will be able to stream 4K video; technology will catch up with itself. The camera essence remains the same as before in the other X-series models, but since Sony released a much needed camera app software update you’ll be able to get much cleaner-looking photos. The two-stage camera button is great. When you depress it halfway down it auto-focuses and then the second-stage the click takes the presumably perfect focused picture. One thing to be conscious of is that there is no optical image stabilization, which is strange because their competitors Huawei, Samsung, LG and Apple are all using OIS in their phones, it makes one wonder why Sony doesn’t as well. However, if you're looking to turn your phone into an amateur or semi-professional picture taking device, this Sony Xperia Z5 should definitely get that task accomplished!

Planning on upgrading your phone? Sell us your old smartphone, laptop or tablet and get some money to put towards a new device! Get a quote right here on our site.